Emphasizing its commitment to the environment and its people with the statement "Our greatest asset is our human resources", Erdemir Maden aims to go beyond national and international rules concerning occupational health and safety and eliminate mine accidents no matter how difficult the production environment is.

In the last ten years, there has not been a single fatal mine accident in Australia, a country that protects the health and safety of all producers with a high level of technology and occupational safety. Following these successful examples, Erdemir Maden continues to break new ground in its industry with the good practices it incorporates into its organization.

Even though no flammable or explosive gases are formed at the iron mines in Divriği, Erdemir Maden has made and still makes significant efforts that go beyond the minimum limits prescribed by legislation. For example, efforts started in May 2014 to bring safety systems to the same standards as in developed countries and take the best safety precautions using the newest technologies, and within this scope, rescue chambers were built first.

Training for the use of rescue chambers

Four mobile rescue stations were purchased for the A-Kafa and Ekinbaşı Mines, which can accommodate eight persons and provide survival conditions for 24 hours even if connections are cut off. The stations installed in the production areas are of international standards, and all employees have been trained on the use of rescue chambers.

In addition, an underground wireless communication system and a gas analysis system that can be externally monitored by a computer and measure the level of toxic gases and oxygen were installed.

In addition to these technological precautions, breathing stations that provide air at certain intervals to personnel trying to escape in an emergency and mask changing stations that provide them with extra CO masks were installed at certain points of the underground compressed air lines. With these precautions, an underground working environment has been created where personnel evacuating the mine due to a fire or toxic gas formation can change their CO masks along the exit route and breathe additional air reaching from the air lines.

A tender was completed for the installation of a monitoring system to determine the location and movements of employees at the A Kafa, Ekinbaşı underground mines and the A Kafa and B Kafa open pits. Installation is going on under the agreement signed with OYAK SAVUNMA VE GÜVENLİK SİSTEMLERİ, an OYAK Group company. The system being installed will be able to instantly locate all employees in the underground mines and open pits and identify fainting or unconscious people. 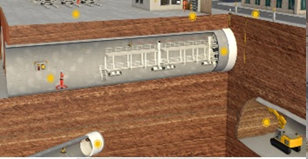 Efforts are planned to be completed this year for the installation of a seismic detection system for the early detection of tensions arising in production areas so that uncontrolled landslides, which are a major risk in this production method, are determined in advance. 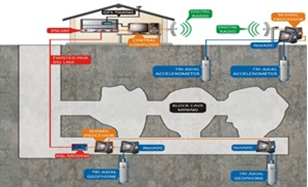 Efforts have started to install a Life Line, built to prevent employees from being unable to locate the exits due to dust and smoke in an emergency. These efforts are planned to be completed by the end of 2015. 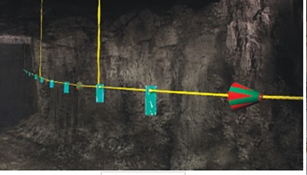 As part of efforts to improve occupational safety, work is ongoing to replace the 8415-meter conveyor belt in the underground freight systems with antistatic and fire-resistant belts and to install a fire detection and extinguishing system designed to fight potential belt fires.